Proud to announce that as a fellow fostered and adoptee, I have been invited to join a plethora of amazing panelists, speakers, and performers having been asked to co-host and perform live during the virtual #NationalAdoptionConference hosted by Celia Center, Inc. created by Founder Fostered Adoptee and Clinical Therapist Jeanette Yoffe. This year on Sat Nov 14th . 2:15pm | Save the dates: Nov 14th & 15th : Check out the program here, get your tickets, and join us 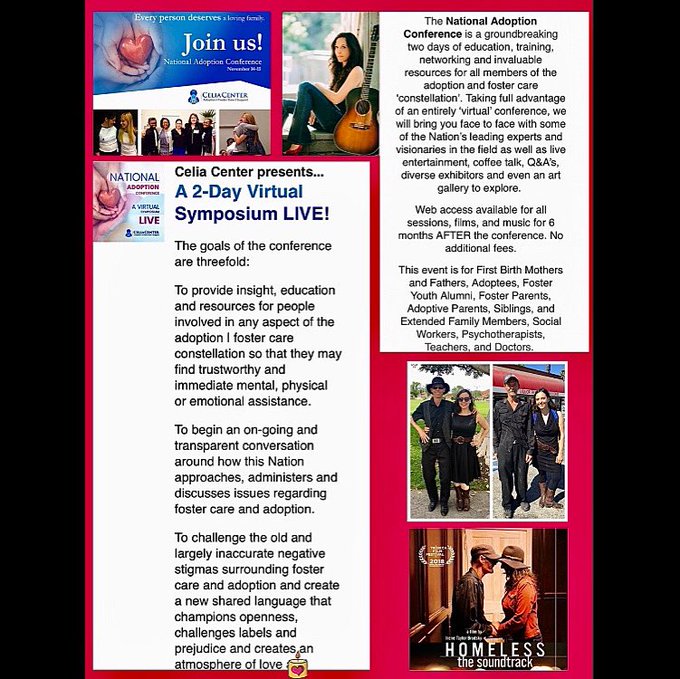 “American singer-songwriter Jenni Alpert otherwise known as (her intended birth name before it was changed in foster care and upon adoption: Cami) is a performing songwriter, singer, guitarist, and pianist. Born in Los Angeles and adopted at the age of four, she started to sing and play piano while staying in various foster homes and began writing songs early. Upon becoming the first Jazz vocalist accepted to UCLA’s four year Jazz Music Ethnomusicology program lead by Kenny Burrell, Alpert took up the guitar as well and began to write and record songs on both instruments independently releasing over 6 albums and touring in over 14 countries to date. Shy of four years ago she found and reunited with her birth father who at the time was homeless, running from the law, and addicted, but a musician as well. Through their biological reunion and unprecedented partnership their reunion story and her birth father’s transformation inspired the making of a short documentary “Homeless: the Soundtrack” directed by Emmy Award winning director Irene Taylor Brodsky discovered and produced by Steve and Paula Mae Schwartz, which garnered several film awards, featured at Tribeca Film Festival, and is scheduled for international release later this year. Currently, the two perform and speak publicly as Cami (aka Jenni Alpert) and her birth father Don the Biological Duo sharing their story and song in support of transitions and transformation.” 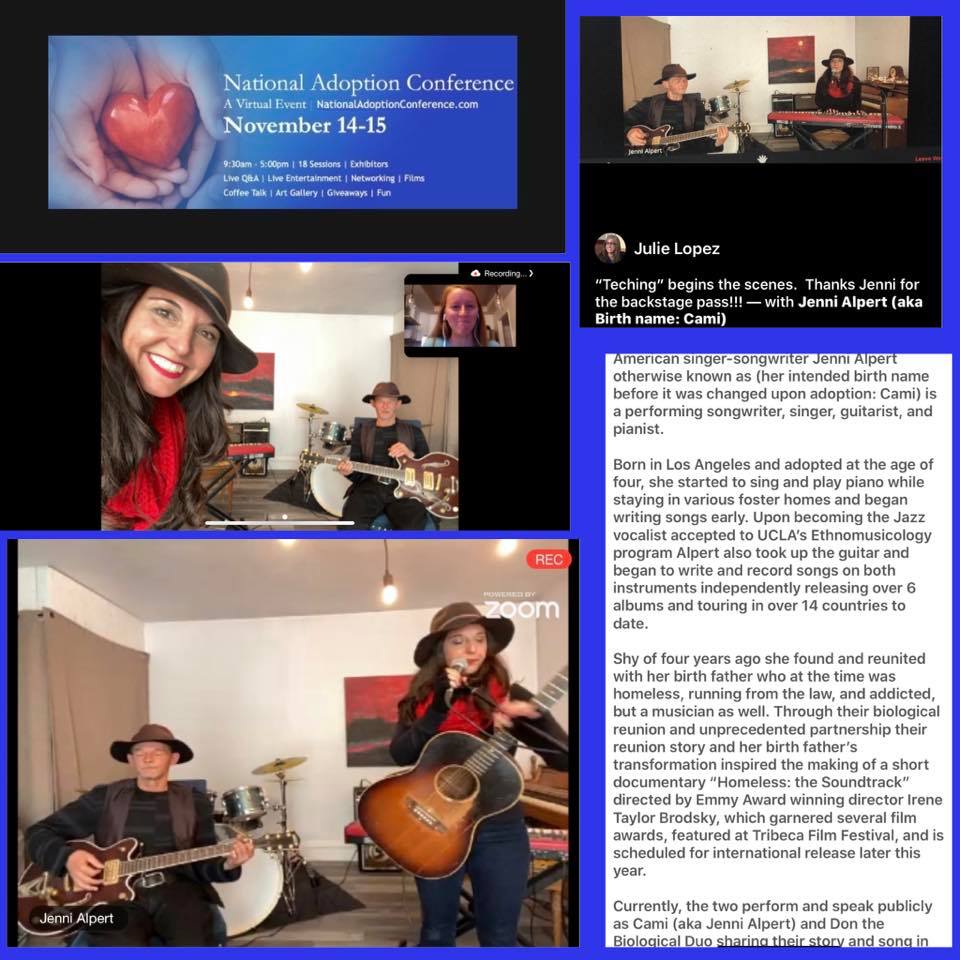 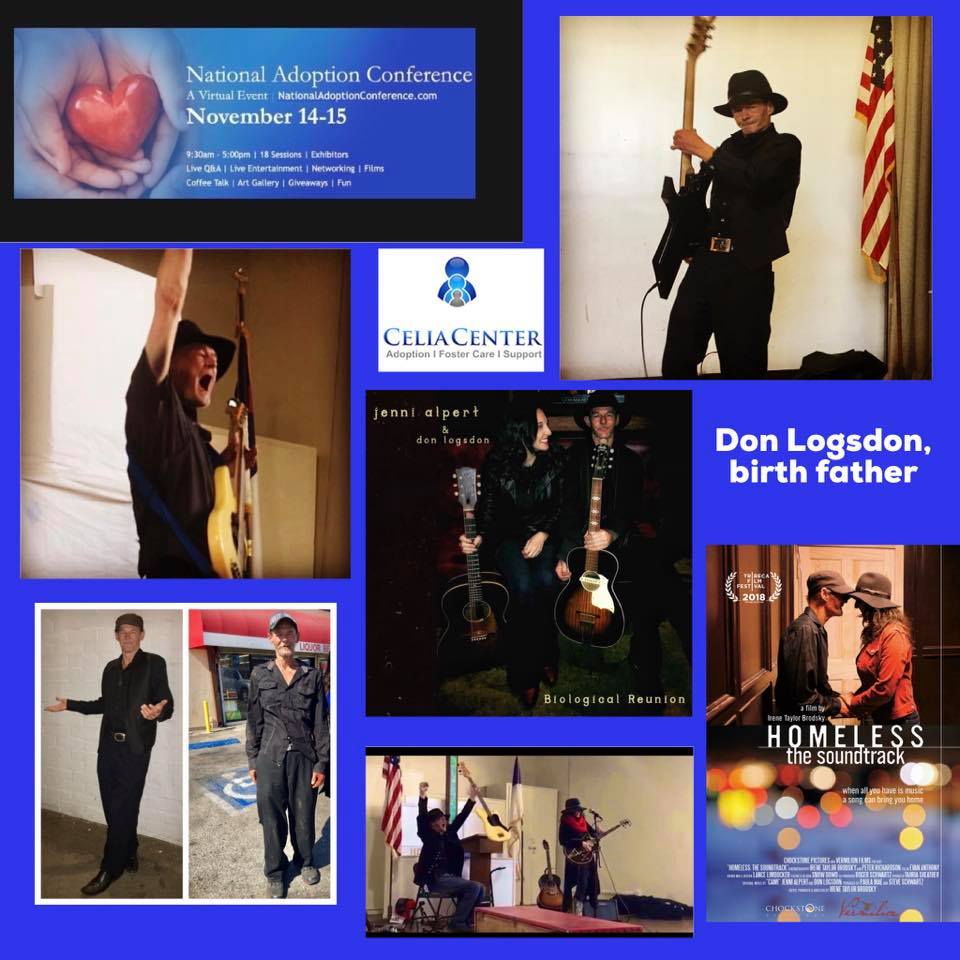 During the conference, my birth father Don was invited to close out this weekend of the #NationalAdoptionConference by Celia Center, Inc. He. Is. So. Cool.

Host: Jeanette Yoffe "Rock out with birth father: Don Logsdon, the biological father of singer songwriter Jenni Alpert aka birth name Cami used to be addicted and running from the law while straddling incarceration and homelessness but also unbeknownst to them alike, was a musician just like his daughter. Upon their reunion shy of four years ago while discovering their mutuality in music and attachment, he chose to change his life and try new things introduced to him by his daughter to develop a deeper relationship with her. As their music kinship and personal relationship solidified, together the two embarked upon a unique reunion journey that now has lead them to performing music together as ‘Cami and Don the Biological Duo’ for various organizations: Hope of the Valley Rescue Mission Van Nuys Help Center for the Homeless, Celia Center, Inc. for the adopted and fostered, and Concerned United Birthparents, to name a few - performing, speaking, and sharing stories about their biological reunion, transformation, and the impacts foster care, adoption, homelessness, addiction, incarceration, and support or the lack thereof have on any individual connected to these topics offering ideas on how to uniquely solution solve to overcome or work with them. He is also the other subject with his daughter in the up and coming short documentary Homeless: The Soundtrack directed by Irene Taylor Brodsky produced by Chockstone Pictures about the early stages of their reunion and their miraculous biological journey to transformation."